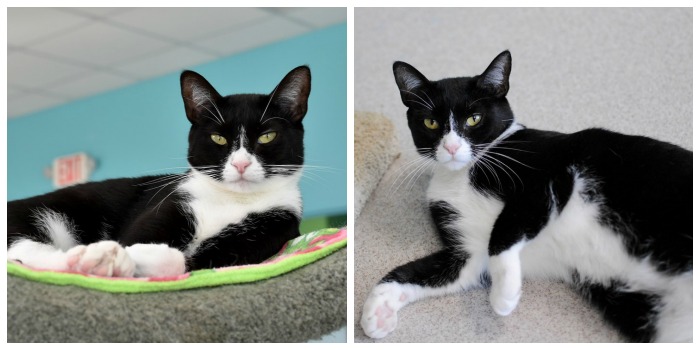 Vivi is a very sweet kitty, but she needs a patient adopter willing to let her trust at her own pace, and be OK if she is not a big, social butterfly right away. Vivi is hesitant around new people, but once she gets to know you, she loves to snuggle up close to you at night. She may not be a love-bug and always in your face, but she’s a nice girl that deserves a family to call her own.

Vivi was trapped when she was 2 months old and the group was going to release her as part of a TNR initiative, but because she was so young, they wanted to give her a chance to be a part of a family. When she first came to Good Mews, she was very shy and stay hidden in cubby-holes. After a few months, she realized she was surrounded by people that loved and cared for her, so she was ready to show us her social side. Now Vivi is out and about, running around the shelter, hanging out with humans and kitties and having a great time. She will be like this in her home but will need time to adjust. Once she does, she will be a wonderful companion. In her foster home, she lived with dogs and cats and did well, so she would do fine in a multi-pet home but would also do OK as a single cat, as long as her human gives her the attention she needs.

Because the rescue she was with was having a hard time finding her a forever home, she transferred to Good Mews to see if one of our awesome adopters would be willing to give her a chance and let her be a part of their family. Vivi just wants to be accepted for who she is and for someone to love her, so hopefully she will find that real soon!