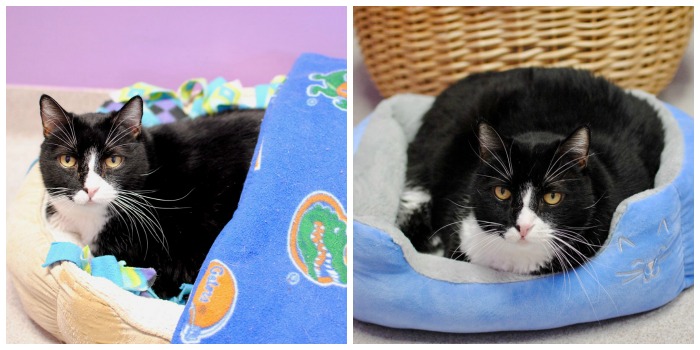 Marcello and several of his housemates came to Good Mews after their mom had to go to a memory care facility. They lived with the same person their whole life and were understandably confused and scared when they arrived. Now that some time has passed, they are getting used to shelter life, but they’d all do much better in a loving home. They were very loving and social in their home, but being in an unfamiliar place, without their mom, some were having a hard time adjusting.

Marcello was very shy when he first arrived, but a lot of people spent time with him, so he started to come out of his shell. Once he warmed up, we saw what a fabulous cat he is! He really is the sweetest guy you will ever meet, and he has quickly become a shelter favorite. He loves to be brushed and will softly purr to let you know how much he appreciates you spending time with him. Kids also love reading to him and he will quietly sit in their laps, engaged in their storytelling.

Marcello is a little chunky and would benefit from a diet in his new home. He is kind of lazy so he will make an excellent lap cat or TV watching buddy. He is an adorable boy and when he looks at you, your heart will melt from that sweet face of his. He craves attention and will let you pet him or cuddle with him for hours if you have the time.

Another adorable thing about him is that he snores! If you confront him about it, he’ll deny it, but we have all witnessed it!

Since he lived with several other kitties in his previous home, he would do fine in a multi-cat household. He would also do OK on his own as the main attraction.

Marcello does enjoy the company of his brother Benton, if you are looking for two loving boys to join your family.